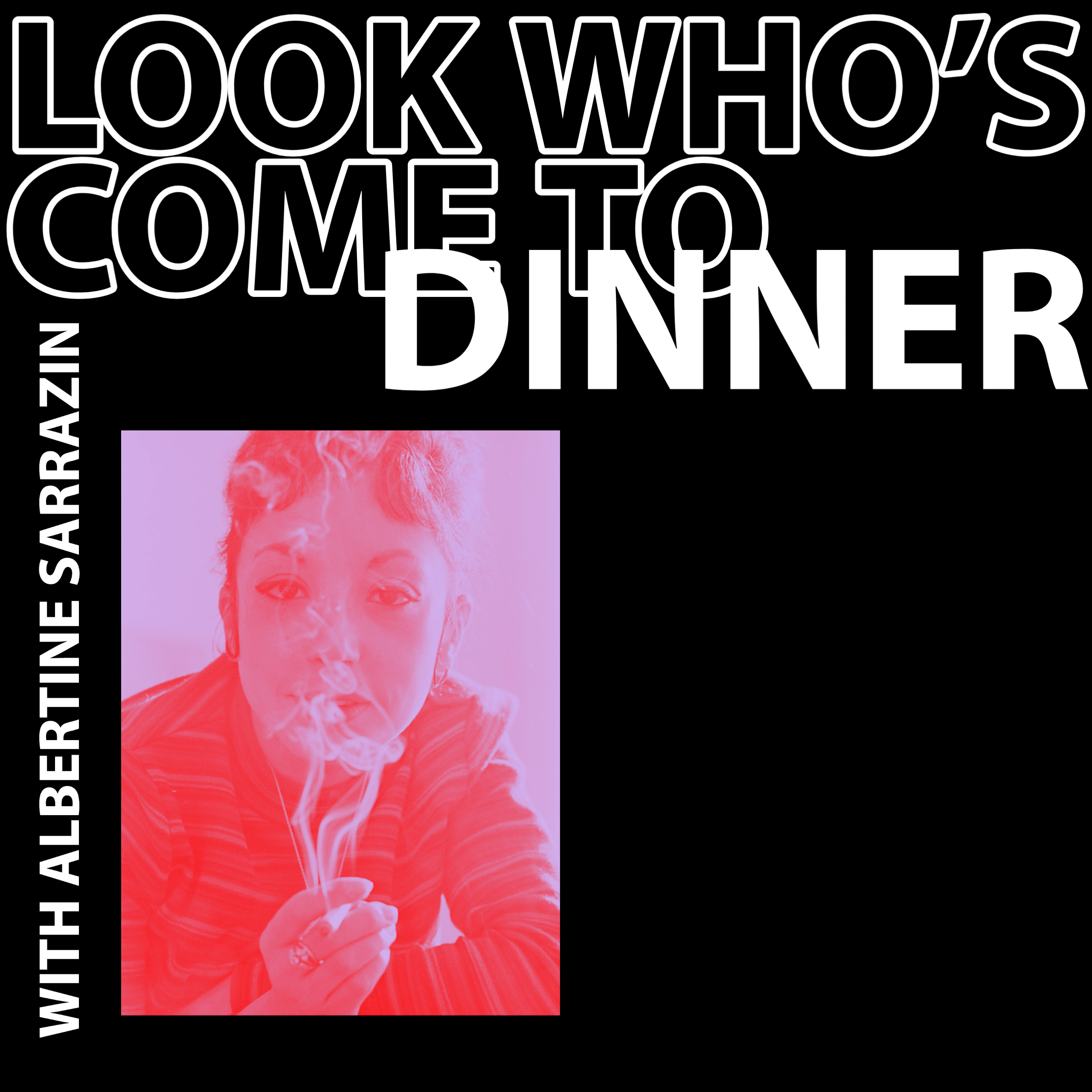 I wonder if she will arrive on Julien’s motorcycle, the one which all those years ago sped Anne away from her prison cell to freedom, to la follie d’amour, and, all these years later, to me. I re-read Patti Smith’s opening essay whilst I wait for Albertine to arrive. I use my elbow to turn the splattered page, stirring the ragu with a wooden spoon which balances divinely, precariously, on my chin.

It is seven minutes past eight. Albertine is late. I dump more oregano into the sauce, now deepest red and hissing at the sudden departure from subtly, that delectable je ne sais quoi. I have overdone it with my haste. Jittery, nerves have got the better of me. Now we shall all know exactly what it is: a profusion of oregano, too much balsamic. I combat the excess with salt and a cheap merlot, which has been sitting, opened, lamely teased, on my bedside table for three days and three nights now. An acerbic blasphemy. The Madonna can’t do much about that now. Albertine’s luminous eyes lead me back and I grin with anticipation, briefly consider changing my blouse to something more… French.

Albertine is fashionably late. I forget to feel put out, irritated, raging over the pasta being way past al dente now, but what can I do. She arrives at my door entirely herself, and I am excited all over again. Not 50 years postmortem, and Albertine’s eyes still glimmer- no, shimmer– as if she has just seen something racing from the corner of her grasp, something delightful, perhaps a little sad. I wonder if she is a person prone to melancholy as I ask to take her coat. I realise too late that she is not in fact wearing a coat. Her bare shoulders smile at me knowingly.

“How very Parisian,” she says to me with a wink, waltzing on in, despite the state of her angle, dressed in a thick white cast.

I remark enthusiastically upon her injury, the broken talus bone, l’astragale cassé: that precise and illusive bone located in the ankle. I tell her that I had never even heard of it- didn’t even know the French for ankle (la cheville), before I read her 1964 novel of the same name, Astragal. A-stra-gal. Until this very moment I had often wondered exactly how autobiographical the ‘semi-autobiographical’ novel was. Is. It is very much still alive, despite the unaltered state of it’s writer.

I suppose this was my answer: Albertine, sitting on my sparse kitchen counter and propping her ankle, the precious astragle, up onto the kitchen sink. She is thirty years old, as she was when she died, in 1967, just three years after the publication of Astragal. She is framed by the view, the skyline breaching the river. And my view is framed by her. Albertine appears in black and white, like an old film star. Only, she is not the leading role. Her beauty is beyond the myopic gaze of the camera. Her boldness lies in her writing. All I will say of her physical appearance is that it was most intriguing, and not at all unpleasant.

I decide, foolishly, to open with flattery. I gush with gauche enthusiasm about how good she looks after all this time. I don’t mention the kidney surgery, worried it would still be a sore spot. I tell her how I loved her book, about how I loved Anne and Julien, the intensity with which she wrote such characters, such insane plots and the ravaging of human emotion. The sore spoils of love as clear to our young narrator as the broken lines of her ankle on the chalkboard x-ray.

Albertine lights up as we sit down to the dinner I have massacred. She does not ask, and I do not protest; the greyish haze of smoke will perhaps distract from the overcooked spaghetti, which dissolves in my mouth. Albertine doesn’t seem to mind. Her interest vacillates, right hand lifting the cigarette to her pink lips, left hand lifting a twisted fork to that same smokey, gasping space. Her teeth glint red as she grins, wiggles her eyebrows in such a malevolent way that I am convinced that she is just another character from her novel.

“Paris was my gleaming Valhalla,” she says when I ask her about the city, about her relation to the place she ran to after escaping from a four year stint in Fresnes. “Just like Anne I ditched that place” -she is referring to the penitentiary- “as quick as a dog. Julien, Emilienne- all on my way to that great sparkling place. I adore Paris. What little I lived of it was…”

Expensive? I say, hoping to amuse.

“Read my diaries, and you will know. Anne recovered there, while I was caught. Life is funny like that, n’est pas? Anyway, I died- as you know- in Montpellier. With Julien, of course.”

You must have been quite the pair, I say, seeing them both speeding away on the motorcycle, Bonnie and Clyde in leather. Far more dangerous, seedy, outrageous. I tell her this last bit. I want to see her reaction.

She smiles tightly and I am reminded, shockingly, suddenly, of her death, her prostitution, her time locked away, these small, constant abuses battering her sails. All the same, she was strong. She rallied against such rotten dealings.

A success, undoubtedly. Her novels bestsellers- La Cavale even won the Prix des Quatre Juries in 1966.

“Ah,” she interrupts, that glint at it again, glinting away in her unfettered gaze. “Literary success is not the end goal. If, after all, all you require is to be known, to have commercial success, why not write, as any old John can, one of those true crime stories? Why even bother to define such a world, so close as it is to your own reality- if only to offer it up, part and sum, a pigs head on an ugly platter, to be devoured by readers who simply desire a fast moving narrative and believable motive?”

She smiles gently. Like a school teacher correcting a child, not wanting to discourage idiocy, merely seeking to redefine it.

“But you flatter me. I am no good at taking compliments. They make me break out out in hives- only worse! My skin mutates into this awful rouge, my head will grow to twice it’s regular size!”

I think of so many writers who have come before her. So many who, consciously or otherwise, are following in her footsteps. The literary tradition of the auto-fiction. The distilling of one’s life into fictitious bounds. Misshaping, misdirecting, evading the pinning down of such inane questions: Is this really you in here, on page 24? Are these ‘characters’ entirely constructed from wondering, or does a deeper excavation reveal concrete bones, the lives of those who truly lived? And ultimately, most irritatingly beside the point: does it add to, or diminish, a work of fiction, to wonder if it’s basis is in reality, here in my world?

I can’t help myself. The three-day old wine is getting to me. It tastes like battery acid, something I have never drank but I would imagine this to be how it would taste. Souring grapes turned mean with too much exposure, too much time spend at my bedside, repenting for past lives. I ask her what makes a writer. If the writerly persona is important, and if it increases or diminishes the writing itself?

Albertine seems tired. Her plate is empty and so she stands, limps over to the stove top and goes fishing in the depths of the pan. Spaghetti clings to her open mouth as she talks. It is hard to decipher the words, for she seems to be propelling herself tirelessly, frantically; stuck on this one, indescribable train of thought and muffling through minefields of dripping sauce.

The overall gist: she didn’t particularly care either way. It was interesting, she conceded, to consider this in an abstract sense. But it was ultimately a kafkaesque debate. To recount the past liberates the teller, but the reader may infer, or impress onto such tales, what ever they wish. The writer may be plucked from obscurity, if needs be. Or she may remain the final, unknowable character. A writer can intend all they like (at this, she smiles fallaciously, and I wonder if she truly believes the things she is saying, or if she is simply teasing. Either way, I am enthralled-) but behind the page lies an equally unknowable reader. Theirs is the final say. For you, the writer, have already penned those final, aching words; they can never be taken back. That is all to be said on the matter. And yet the reader may take those words as the jumping off point, the diving board from which to hurtle back into those icy depths; coaxing out from the murkiness within, unspooling and unraveling all you have intended with that naive hand of yours.

“I was just a girl who escaped from prison on the back of a motorcycle with a man whom I loved. I have known happiness. I have met sadness, many times. My past pleases me, I wouldn’t change it for the world; to regret is to deny… and I hold my head so high, that sometimes I have cramps. There is life, and I write it so. Intent is forgotten, in the end. Anne is a delinquent, a criminelle; a girl seeking refuge, a girl in love. Maybe I, too, have been all of these things. Maybe my writing is because of it- or in spite of it- who’s to say?”

Albertine Sarrazin’s short life may be obscurely compressed into a series of tragedies: maternal abandonment in Algiers, her birth country, revolt against her adoptive parents; victim of rape, imprisonment, prostitution; and then escape, freedom, love, writing, and finally, cruelly, that final tragedy, death. But death was far from the end for my Albertine. Death becomes her. It allows me to cook her a sub-par dinner in my imaginary seventh floor flat in the sixième arrondissement. She invokes the rebellious spirit, literary revolt, immodesty, sex, queer-identity, la Querelle des Femmes. And then, of course: freedom, pure and simple.

Albertine the rebel looks up at me from the pan. She smacks her lips and her glasses are all fogged. Her luminous eyes are denied to me, covered in smoke, in red splatters of tomato which dry like paint, and I get the feeling that this is how she wants it to be.

“Thanks for the dinner,” she says, licking her lips.