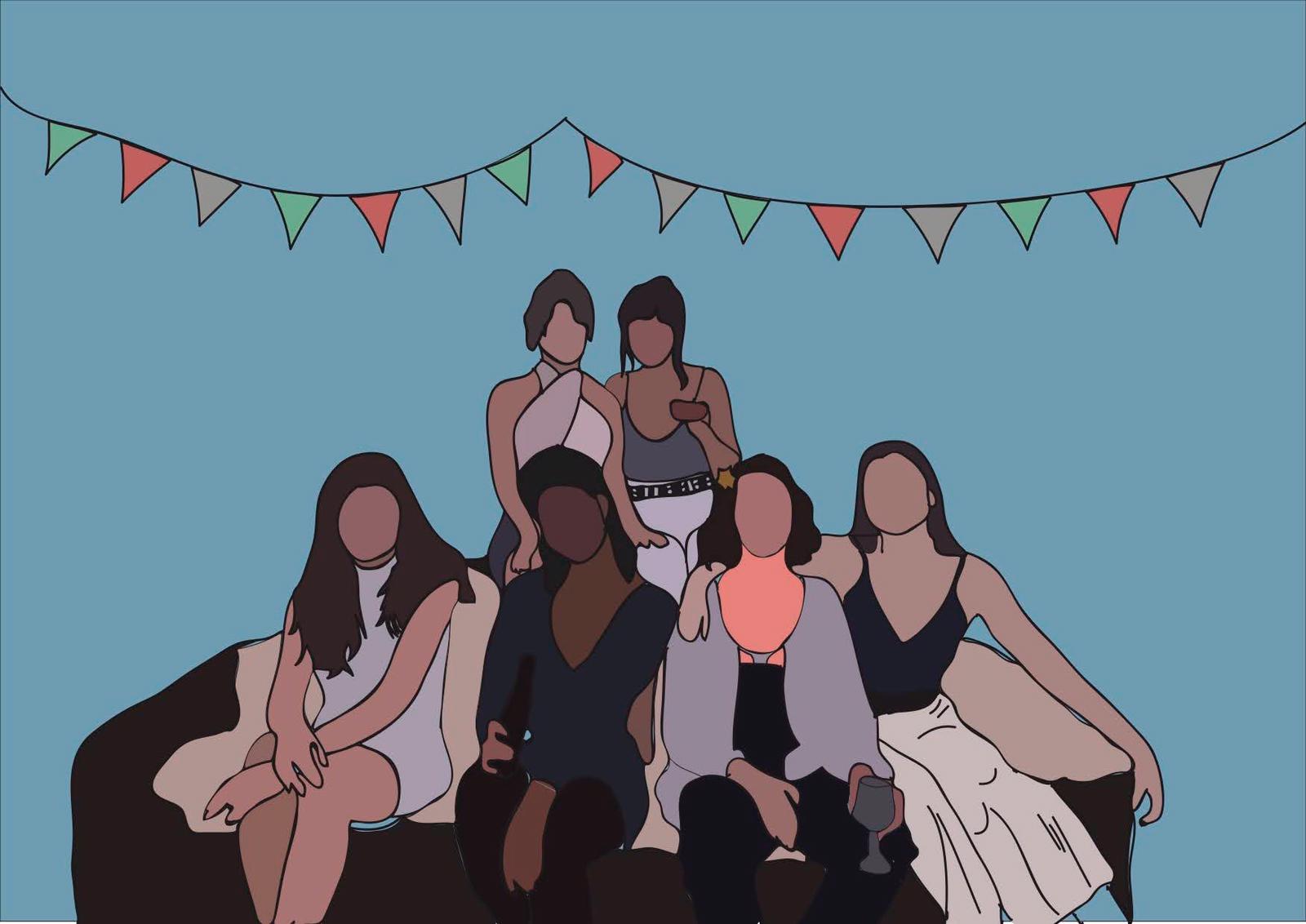 $ofi’s guide to $elf-i$olation: bobbin’ along

Bobbin’ Along: Sew on and Sew Forth

This picks up the thread from my initial survival guide to self-isolation, ‘One Stitch at a Time’, in which I discussed the joys of learning to knit. And now, from the suitably jaded perspective of week 9/10 and with notably less enthusiastic pep than the original post, I bring you my revised edition.

It seems (final pun, I promise) a lifetime ago now… After we crossed a certain mental threshold this Lockdown, my friends stopped speaking of days, weeks, months and instead opted for ever more conceptual ways to refer to time’s passage. The current favourite is ‘one temporal unit’ which can last anything between the time it takes to boil the kettle, finish an entire series of Jane The Virgin or even complete a knitted scarf. And so, I shall say it has been a whole temporal unit now since I have finished the famous scarf, and to the bain of my flatmates, have refused to take it off ever since. Yes, it has been my source of comfort and joy, but Bria did make the very valid point that I will never acclimatise myself to the icy wind tunnels of Holyrood Park if I wear the scarf at home 24/7. In hindsight she was definitely right; either way, I retorted that the woollen scarf was the one thing keeping me warm, well-mannered and affable before informing her she was completely wrong. What can I say, I was defensive, my manners clearly escaping me for that particular conversation?

It would be great to say that I have kept the knitting up, and that as I write this, I am in fact surrounded by a colony of my own hand-crafted soft furnishings. But that would be a lie. The real reason for this article is to explain that one project, that might initially appear to be a personal project, can in fact capture the inspiration of a whole group of people. And so, as I find myself learning how to sew, this time with a needle and thread (like the summer version of knitting), I would like to talk about a new scarf that has come into my life. How it came to be; but more importantly, how it came to symbolise everything about I have learned about the value of working collaboratively during these strange times.

This story starts like any good story; with a few drinks and a smile for the camera. A birthday party, Soph and Bria’s 20th and Ayelen’s 21st. We celebrated all together, and in style. We sat on the sofa, posed, and realised that this was our first proper photo taken with the six of us, freshly faced, our new friendship being flashed and captured before our squinting eyes. No matter how messy things get as the night unfolds, we will always have this photo, we said, taken just before the speakers blew up and craziness of Sparkly Party ensued. A whole temporal unit later, after all the ensuing craziness of Lockdown and I still have the same impression of that moment. Because Bria’s younger brother, for a genius quarantine project, has successfully taken that photo and immortalised it. This was achieved by digitally colourising the harsh lines with a careful stencil. I’m not sure how long it took Evan but certainly, longer than it took for us to drunk-smile and say cheese. This way the photo’s design became the ideal lockdown project, because if we have learned anything recently, it’s that the more time-consuming the lockdown activity, the better (we are now a nation that will readily dedicate whole weekends to Twilight marathons, the slow-burning joy of homemade bread/ /the learning of TikTok dance routines). Anyway, to Evan we are grateful, for the design has become the logo for this very blog; a home for present-day inspired projects and creations.

But that’s not the end of it. This week, I myself turned 21. And rather than all the dread and anxiety I had attached to this milestone (less about the age- more about accidentally burning down the building: my infamous birthday present to my sister on her 21st), but rather than all the dread, I was in fact overwhelmed with relief. Because not only had my flatmates put on such a wonderful day for me, told me they still loved me and made me feel exempt from the awful person I had feared I had become during quarantine, my big sister had also sent something very special up in the post. She too had forgiven me for birthdays past and the curse of the 21st was lifted. When I opened up her parcel, I found the same design of Evan’s but this time reproduced on a giant silky scarf. It was a gift for me, to wear all my friends in those beautiful millennial colours, around my neck. My sister had commissioned her boyfriend’s mum, Jane, to create a wearable version of our logo in her screen-printing studio. And so, for Jane, this also became another quarantine project. Done so artistically and generously (the scarf is really big), the project became a collaborative one, bringing joy to all involved- especially me…….

And it doesn’t stop there!! Before I could proudly wear the new scarf out of the house; there still remained one more bit of crafting left to do. A final Lockdown project; a finishing touch, shall we say. I had been instructed to ‘hand-roll’ the silk hem. Although straightforward in theory, ‘Hand-rolling’ presupposed a nicotine habit/ sewing ability that I did not at the time possess. And so, I set off to learn in the only way one learns anything worthwhile these days (YouTube is also considerably cheaper than University, just saying). The disembodied set of thimbled thumbs in the YouTube tutorial warned me that the road ahead would be hard. But Soph lent me her sewing kit and I was determined to complete the scarf hem.

One temporal unit later and I thought I was getting the hang of it. Bria and I spent a pleasant afternoon crafting away on our respective quarantine projects- her with collaging yet another Skinny magazine, me with the scarf and sewing kit on my lap. Just when I had finally secured my last stitch, and had gone to get up and stretch my legs, I heard a very slight noise- a noise that let me know my sewing was not quite going to plan. Perhaps it was the noise of my last two braincells clamouring together before they too crashed and dissipated, or perhaps it was a slight cry I myself had let out in pain. Because in that alarming moment I discovered that I had been sewing the whole row not only to the hem of the beautiful silk scarf but also to my own trouser leg. I was well and truly stuck; locked-down, if you will. To my own dishonour, this happened more than once over the course of the sewing session. But that’s fine, I just gritted my teeth, picked up the stitches and carried on. And I managed it, all by myself through sheer will-power and strength of character and self-discipline and-

That would also be a lie. I was rescued by my flatmates. Determined to see me in the scarf, they took over the job of hand-rolling the silk hem and thanks to their professional handy-work, rather than my own, the new scarf is finally ready to wear. It’s been a full-on project, for me to be able to put this scarf on, and to be honest, I hardly feel worthy of the artistry that has taken to get it here.

First came the woollen scarf; a solo project, one that brought me joy and protection from the Scottish winter months of April and May. And now silk, and sewing, for #girls in the #summertime. One of the things I learned during the initial lockdown period was that I get attached to things very easily. This was later confirmed thanks to my poor sewing skills (I became attached to the silk scarf quite literally albeit briefly). Its summer now, and with lockdown hopefully coming to an end, I hope we don’t unlearn the biggest lesson here of all. That inspiration often manifests itself in a way that can only be realised collaboratively. That the more time-consuming and more heads and hands involved in a project, the better the results.

Thank you all; for forgiving me, for teaching to me to knit, to sew, and that patience is a virtue, for helping me, inspiring me, encouraging me when I get frustrated, and most importantly, for knowing when to draw the line, put me out of my misery and finish it off for me.