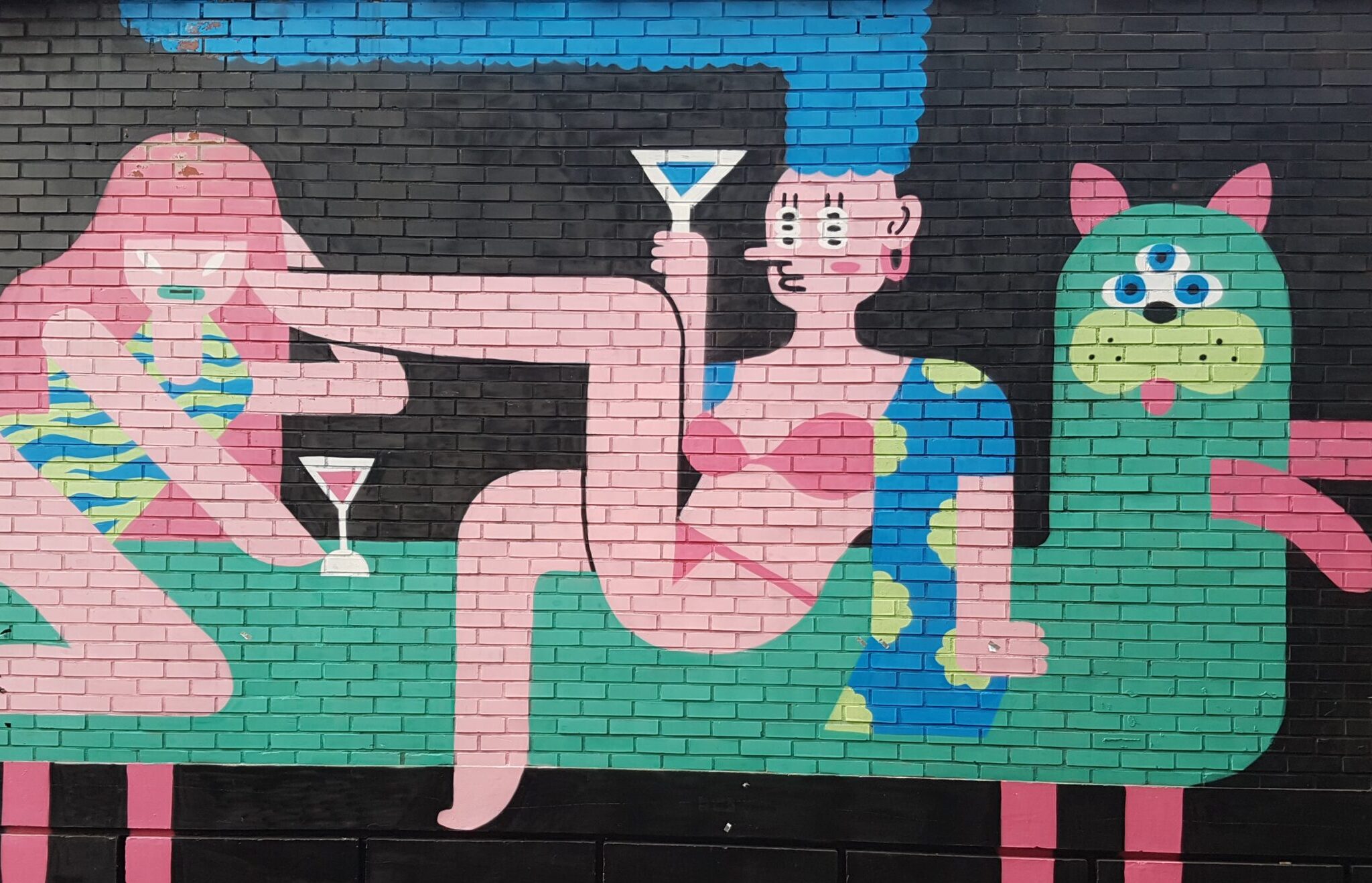 cafecitos and coping at home

It was the 23rd of March and I was feeling the kind of exhaustion that comes after a stressful day. I had spent much of my day packing up my room in my student flat for the Easter holidays, of which included alternating between furiously plastering the hole that I had ripped out of my ceiling at 2 o’clock in the morning and frantically hoovering the Polyfilla that was falling from above onto my carpet and mattress.The Great Student Migration, at least in Edinburgh, had begun almost as soon as our exams were cancelled once people sniffed out a chance to save months’ worth of rent by returning home and many international students were forced to go home before the borders of their countries closed against travel from the UK. Nearly all of us at Fairly Current had decided to remain in Edinburgh at the very least until the end of May, with only Ayelen having moved out that day, choosing to isolate at home with her family.

Truthfully, I had been resistant about coming home. Information regarding Covid-19 had changed so much from the past two weeks; after initially promoting herd immunity to the huge U-turn of closing of all schools on the 20th, I wondered whether it would be a smart decision to travel down to London, when I was posing a risk to my Nan and Dad, rather than isolate with my friends in Edinburgh. Moreover, I was unsettled by the lack of control I had over the developing situation; Covid-19 had utterly disrupted my plans for this academic year, and I knew deep down that the possibility of not being able to come back up was high. Whilst my very being rebelled at the thought of being locked down in Hainault for months at a time, in order to placate my parents’ rising panic, I moved my train ticket earlier from the 30th of March to leave that Wednesday, but held onto my return ticket for the 13th of April. (As I am writing this in my garden during week 7 (??? Christ the days are blending together), I can confirm that I am so unbelievably naive that I should never be asked to predict anything ever again. I also got a refund).

Anyway, that evening on the 23rd, Sofi, Bria, Vale, Sophie, and I were spread out through the flat, lounging like fat cats after what must have been a slap up dinner, when at the strike of 8 o’clock a collective hush fell over the flat. One by one, faces were illuminated by screen glares and the news of the UK wide lockdown trickled from one flatmate to the other. What I had been fearing most had finally occurred, and I remember the feeling of sheer dread as I defeatedly flipped over my phone, to see those five cursed words:

The ensuing three phonecalls I had with my parents confirmed to me that they had quickly become students at the University of Whatsapp, as they blasted down my line ominous warnings of martial law and military tanks on the streets, with nonsensical affirmations such as being forced to carry identification cards and, to my mum’s terror, that all transport would grind to a halt. The picture that they painted to me of what London lockdowned would look like over that fifteen-minute conversation was a blend of the 2011 riots and the Cuban Revolution of ’59.

I get on with my family well. Really well. But after that call, I had the vague sense that the prospect of being locked down at home for weeks on end would be comparable to a Christmas dinner, but instead we’re all strapped down to our chairs being forcefed a buffet of rice and toilet paper, as a soundtrack of Boris Johnson clapping over a frantic jazz instrumental loops and loops. Nonetheless, I had reached such levels of such emotional stress, which required many hugs and a solid mug to tea to get myself back into a communicable state, that I bought a ticket to go home at half ten for the next morning, even though I only due to go home two days later; ultimately, my quick departure from Edinburgh was only made possible by my friends taking turns on a rota to make sure that all my boxes were picked up after I left.

Once I got home, the initial calm that had fallen over the house after my parents had seen me in the flesh soon subsided into an atmosphere of suffocation due to constant sensory overload. The soundtrack to my days and my nights was the news; it was always on and blasting out of every electronic device that could speak; if walking through my house, it was often the case that BBC news out of the TV in the living room would transition to Fox News coming out of the radio on one side of the kitchen and then to LBC out of the Alexa on the other side of the room. Walking into a room in my house turned into a game of Whack-a-Mole, turning off devices only for another person to walk in and immediately turn it back on.

Our evening dinner conversations would always diverge, consciously or not, onto the daily death toll or the daily update, my Dad in particular passionately dissecting the latest conspiracy theory or politician’s speech, so I was never really in a peaceful mindset once I went to bed. In such a situation, it seemed that all boundaries and restraint flew out the window and it was like watching a terrible car crash in slow motion; nauseating but you are unable to pull your eyes away from it. We were not allowing ourselves to disconnect, to have any peace or quiet, and I inflicted this on myself too by bouncing from my phone to my laptop as I floundered to fill up my time.

Obviously, it is now week 7 and I have not had a Shining-esque breakdown where I’ve gone after every member of my family with a hatchet.. Over the weeks leading up to now, I had realised not only did I need to find activities that I could do, but I needed some time in the day that 1) would give me some of the consistency and structure that I had lost during lockdown but 2) wouldn’t overload my brain with information.

Thus entered my new daily ritual and why “cafecitos” is the most important part in the title of this article. Translated to “little coffees”, the ritual of the Cafecito was one I learned from my abuelos and is normally repeated three times a day. Whilst this worked in the heat of the Cuban climate, I limited this to my morning and maybe once more in the afternoon so that my kidneys wouldn’t disintegrate.

When I wake up, I make it a point to not check any notifications (only the time), and go downstairs to make my cafecito. I use a cafetera and fill up the bottom of the pot with water until indicated, but now I never pack down the coffee which has solved the issue of the water being blocked and thus not completely brewing. Whilst you wait for the coffee to brew on a low-medium heat, so that it doesn’t burn, drink a full glass of water. I have a terrible habit of standing up out of impatience to immediately consume whatever food or drink I’ve made, when I should be sitting down to allow my digestion. Therefore, make sure that you are relaxed and near some sunshine, perhaps by an open window. When the coffee is ready, I stir in two and a half teaspoons of sugar in case someone else wants some ( I don’t make the crema, which is basically sugar and coffee whipped together, because I’m fairly lucky to not have any teeth fillings and I’d like to keep it that way ) and slowly sip at it. The whole process normally takes me ten minutes and the mental state it creates in me can be encapsulated by the following meme:

Obviously, the coffee itself wasn’t the magic ingredient into easing me into life under lockdown, but it was more the principle of setting aside time solely for myself that was purely reflective. Sometimes, I would think about something I wanted to achieve that day, but most of the time I focused on the steps of making and then drinking the coffee, before I would then have to figure out the rest of my day. I’m not great at meditation, but I felt that by having something to focus on in that moment, with no background noise, I got pretty close. It also encouraged me to get up a bit earlier to the eventual activity that my family and my nan’s carers would bring. This can be easily replicated by making a cup of tea or a hot chocolate, if you prefer to not bring on a caffeine habit, but even this can be replaced by any gentle activity that can be ritualised (e.g light morning exercise, colouring, knitting, doodling, writing, tidying, to name a few). If I was feeling stressed or anxious, this ritual helped keep me feeling grounded and that no matter what happened, I would always have my cafecito the next morning to keep me going.

After talking to both friends and family, something that was agreed upon was that we all felt lost, in one way or another, after losing our routines and daily rituals that came with our average workdays; it’s a feeling I still struggle with now, especially after my sister began her third term of university remotely, as did my mum with her work. At home, things improved after our communication with one another of our anxieties regarding the volume of information with which we were bombarding ourselves, and to fully become comfortable with the knowledge that this was the world now. And slowly, we did find hobbies that could fill up our time; for me, figuring out how to sew surgical masks that were actually functional, and didn’t cut off blood flow to the ears, has followed into learning how to alter my clothes and translating fashion magazines that I had been putting off for months. Doing up the garden, watching horrendously produced B movies (and the alien conspiracy theory documentaries that would follow) and practicing TikTok dances; these are all activities that someone might be doing right now to pass the hours, the same as you. And please don’t let “secure the bag” Twitter make you feel you have to pass this time starting a fourth business/learning three dead languages/ predicting the second coming of Jesus.

The truth is that there’s not a right or wrong way to get through our current situation – just as long as you get through it, be it through having a daily plan, beginning your day with a small ritual or just doing whatever next takes your fancy.