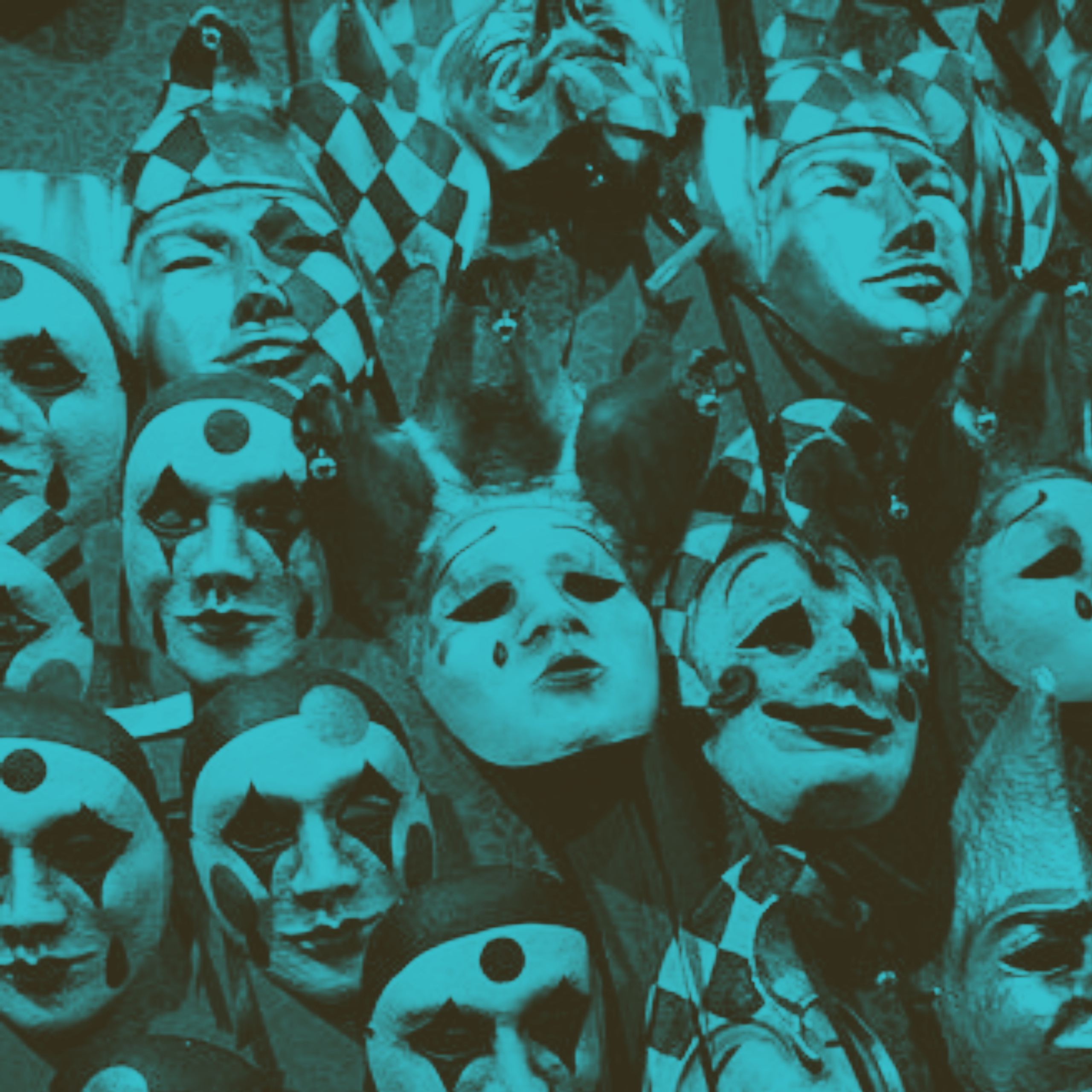 The Carnival | Pt. I

Chapter one: Meneghino
In the Town inhabited by masked citizens, he who chooses to live unmasked is the most sincere.

As Western tradition follows, carnival begins in the weekend before Lent. But in recent years, the Town had been unwilling to limit the festivities between the days Sacred Saturday and Ash Wednesday. In fact, the year in which our story takes place marked a whole century since the Town’s degeneration into a state of constant carnival.
The masquerade was a way of life. Whereas in the past, the practise of masquerade had enabled young lovers to unite, it was no longer a giddy preamble to the Town’s religious retribution. That is to say that nothing- not the sexual indulgences of Sacred Saturday; nor the dancing the feasts of Shrove Tuesday- nothing, needed repenting for the following forty days of Lent. That the celebrations had been converted into the norm, devoid of penitential meaning, is crucial for our story. Since the old carnival king ordained, one hundred years before, the Town had observed carnival ritual continually.

Meneghino had been a humble servant for most of his youth. He was tranquil by nature and had a calming effect on those around him. To his bosses, he represented the serenity of provincial living. The regularity of his manners and servitude made him popular with other citizens of the Town. For it was a small town and it rewarded the merits of its inhabitants with reverence and respect. Meneghino had never aspired to be admired, to be illustrious, or beautiful, instead seeking to attend his fellow citizens where his humble labour was most required. In that way he differed from most the rest of the Town: they had very stringent values of Love, of Beauty and of Endurance.
As the times changed, and the years were leading up to the centenary of eternal carnival, so did the job market. With the celebrations now observed by everyone in Town (Meneghino himself included), his work was no longer needed at the manor house. It was common knowledge that toilet basins and silverware went unpolished during the festivities. His wish to maintain employment at the manor, was complicated by the fact that the Signore and Signora were no longer paying him. And so, at the distinguished age of thirty-four, Meneghino decided to change tact and run with the times.
As I mentioned earlier, his humble desire to serve the needs of others shaped his decision-making process. “Only essential work is needed during carnival”, the town crier had announced in the central plaza. “Only work that fills our life with the Town’s carnival values: of Love, of Beauty, of Endurance.” Considering his quantity of friends in the Town, and what they most required during carnival, it was easy to settle on a new occupational goal. Meneghino’s popularity and good reputation would already provide him with the sufficient clientele to support himself. It was obvious what had to be done. He would tend to all their Beauty needs. In the central plaza, in between the chapel and the tavern, Meneghino used up his humble savings to purchase a barbershop. He was soon the most successful hairdresser in the Town.

The south facing windows filled Meneghino’s barbershop with a perpetual sunlight. The incessant sunshine and noise reflected the continuous carnival atmosphere and constant hustle of customers. His was a custom-built carnival barbershop. At its entrance, the painted wooden shutter doors aligned to display scenes from the masquerade, although seldom not swinging apart with clients. Inside was a beautiful disorder: the interior was shabby but functional. The leather salon chairs were worn out from constant use. The brass mirror was dull and gave the effect of a slight distortion when looked into. “This will do”, Meneghino thought when he purchased the old mirror, because what did a slight distortion matter in carnival? -no one aspired to look normal. As one of the few professions still relevant to carnival life, the hairdresser’s figure soon started to affirm itself in the society of the Town. In this way, Meneghino was made to feel more useful than he ever before. His role extended beyond that of a hairstylist, barber, beautician. In the period running up to the centenary of constant carnival, most had denounced their professional work to keep the party alive. And so naturally, Meneghino was also the Town’s psychologist, advisor and, very often, confidant. All sorts of colourful characters frequented Meneghino’s barbershop. Let us start with the ones relevant to our story.

There was Balanzone, the ancient doctor who, whilst having his moustache styled, liked to deliver sermons on the benefits of homeopathy. He liked a natural hairline, and a naturally distinguished grey beard. Other idiosyncrasies included hardly fitting in the salon chair and demanding that cut hairs be collected afterwards for his personal use. He was a creature of habit; enjoying a systematic routine of complaining about ‘juvenile delinquents’ before letting out natural gases and wiping his beard on his costume sleeve. His mask was black and tight fitting to his ruddy leathery face. They all had their quirks, thought Meneghino, and treated the doctor with the same passive servitude he did all the rest.

Then there was Brighella and Arlecchino, the twins who would shower Meneghino with love and kisses before demanding the latest and most outrageous trends. They would walk in with adolescent swagger and grab the attention of the whole barbershop. Devoted aesthetes, they wanted the world they walked in to be as beautiful as they were. Brighella, with all her arrogant charm, would have introduced herself to the reader, like to all other acquaintances, as “the older twin by seven minutes.” She designed her own costume as well her brother’s. Although their physical features were of the same epicene quality, she distinguished herself by her monochrome cape and her distinctive chiffon veil mask. Whereas her brother Arlechinno, meanwhile, opted for dark purple to match his checked jester clown-suit. Ever the entertainers, it was said that the pair hosted the most extravagant afterparties in Town. And although the hairdresser himself never got invited, he appreciated the regularity of their custom. And he found them amusing; rumours surrounding the twins’ lifestyle choices were always wild and entertaining.

The twins looked up infinitely to their friend Gianduja, a kindred epicurean soul. He was the most handsome and by far the most fashionable of all the barbershop customers. A proper cavalier-style party attitude to life, Gianduja would regale his young friends with stories of his many lovers from carnivals passed. The Town celebrated such accomplished lovers, for what Gianduja boasted was one of the pillars of carnival citizenship along with Beauty, and Endurance. Gianduja really was the life and soul of any gathering, a keen musician and dancer, most people would have said he was an embodiment of the carnival values. It would have been hard to see past his buoyant spirit and all-round attractiveness, so Meneghino never bothered. His mask was golden and silver, his suit was royal blue, his hair was ringlet-like and he had no enemies to speak of.

Naturally, there was an innumerable quantity of other customers that frequented Meneghnino’s barbershop, but for the purposes of our story, these are the key players. Almost. Now that I have thoroughly set the scene, let us transport ourselves to the very same barbershop, on the very same Sacred Saturday, of the very same spring of eternal carnival, in which the news of a murder was received. The twins were there, amongst a youthful throng, waiting not so patiently for Meneghino to finish styling the doctor’s moustache. Our final character, Pulcinella, came crashing through the wooden shutter doors in his distinctive white baggy cotton suit and black death mask. Pulcinella was the town-crier, and a good friend of Meneghino’s.
“Townspeople, hear your news. Murder! Murder! The body of a young man, poisoned, murder!” the town-crier shrieked with full carnival like performance.

Eyes darted around the room and Meneghnino felt instantly which presence was missing. A golden one. The room became a shade darker and a touch colder; Gianduja was absent. Before riots broke out in the shop, Balanzone the doctor pulled the hairdresser aside. “You are the one who needs to get to the bottom of this,” aggressively, “What do you mean?” spat out Meneghino, hardly recovering from the shock of the news. The doctor retorted: “Look around you, you are the only one that has gained the trust of the townspeople. Only you can find out the truth.” the hairdresser observed the array of colourful characters around him and shook his head in both disagreement and disbelief. “Look again, Meneghino. They are all in their masks and their carnival costumes, any one of them could have done it. Even he who delivers our news is masked. This is what the Town has come to.” The hairdresser felt overwhelmed and full of rage, he was starting to understand, and even before Balanzone opened his mouth again, he already knew what was coming:

“In the Town inhabited by masked citizens, he who chooses to live unmasked is the most sincere.”

This is when Meneghino laid down his scissors and stopped to look at himself in the dull brass mirror. He gazed into his own grey eyes and glanced up and down at his humble work clothes and apron. It was true, his customers always donned masks, just like all the other citizens of the Town in recent times. He recognised himself as an outsider, at once naked and innocent. Against the gravity of the crime just committed,the murder of a young man, Meneghino measured himself carefully. And he realised that yet again in his professional lifetime, the needs of the Town had shifted. He had gained their respect as a humble servant, he had gained their confidence as their friend and barber, and he would shield their integrity as their investigator.

STAY TUNED FOR THE UPCOMING INSTALLMENTS OF THE CARNIVAL