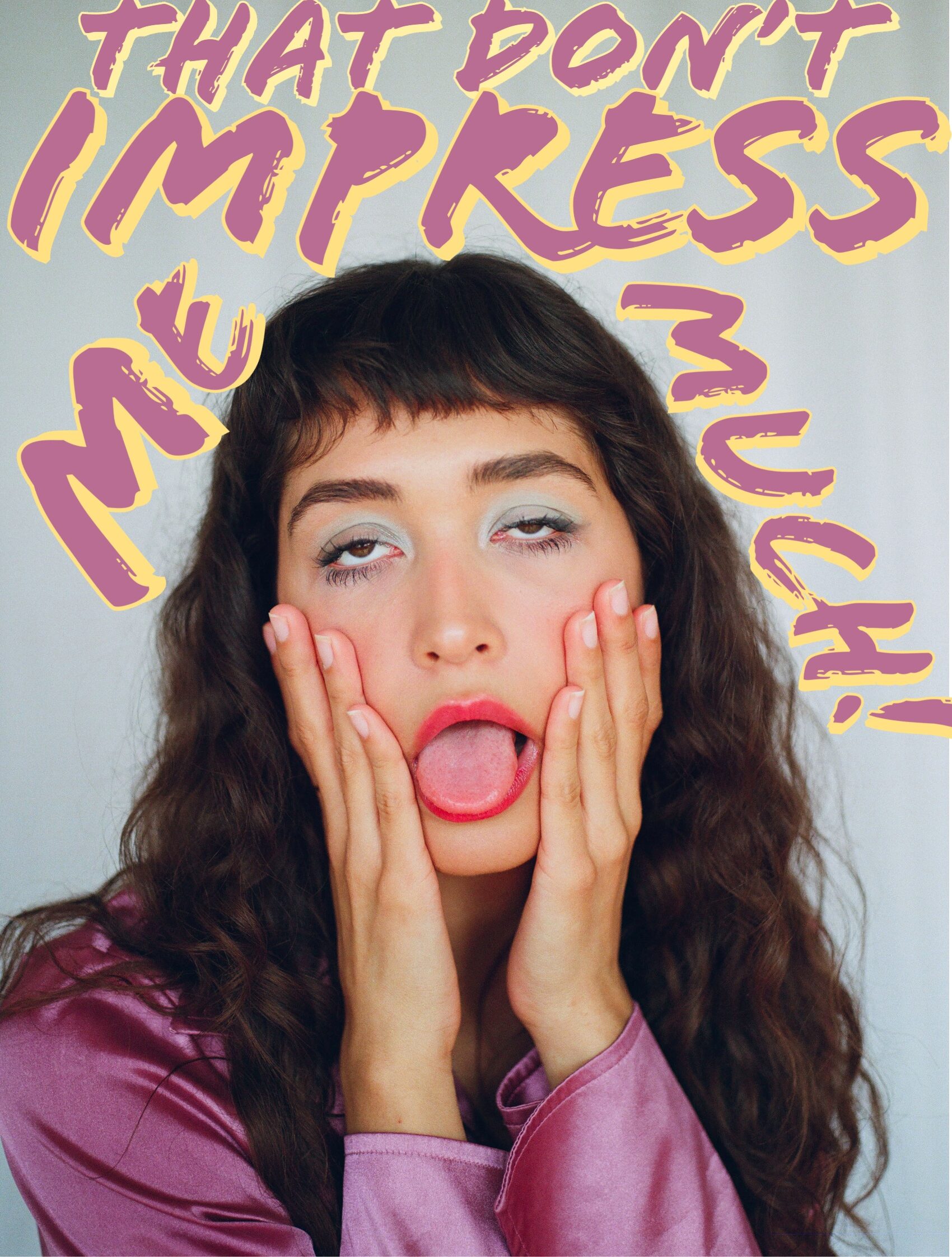 ALL POSTS, re: views of the world

‘That Don’t Impress Me Much’: An Overlooked Anti-F*ckboy Anthem

Every decade has it’s power anthem. Specifically, it seems that every decade has that one powerhouse, feminist tune, lamenting, and even completely doxing, the insipid and irritating qualities of some particularly wanky specimens of the male species. These songs, mostly underrated modern hits, are in some ways the unconscious response to the incessant representation of women in the music industry as hyper-sexualised products, ready-made for mass male consumption. Hey man, sex sells. But not always are we shown through music an inversion of this image. The response, from the woman herself, here to tell us that the knight in shining armour who slayed that dragon in some macho attempt to slide into her DM’s, has slowly but surely undergone a full circle metamorphosis, and has now transformed BACK into a disgusting, slimy toad, who spends all day bumming around on his PlayStation and forgetting that you can, in actual fact, demystify the F*ckboy allure. And let me tell you right now, our poor princess did not smack a quick one on those slimy, porous, amphibian lips just to find out that the sexy man before her is really, after all, still just a fucking toad.

This all began when the YouTube algorithm recommended me a video from the Australian NME radio station, of the band Haim performing a cover of Shania Twain’s 90s hit, That Don’t Impress Me Much. Ms Twain has been floating around the background of my musical wheelhouse for a while now, and it was only upon viewing this fabulous cover that I truly began to seriously consider this country lady.

In true millennial fashion, a swift internet deep dive found an article from a 2017 edition of Rolling Stone, in which Caitlin Rose gushed about Twain, admiring her as a pioneer of feminist themes and her attitude regarding men as one which declares: ‘I will take no shit and all of your money, thanks!’. And, the more I listened (and sang along REALLY loudly) to this particular banger, the more I felt it to be somewhat of an overlooked anti-F*ckboy anthem. Twain’s winking wit as she sings about men who care more about making her take her shoes off before getting into their car and being right about everything, more than actually showing any interest in her. Tongue in cheek lines like,

really play on long held historical pressures, forcing women to settle for significant others who really are just ‘alright’, in order to fulfill some rather messed up social expectations regarding the uncomfortable and frankly dangerous idea of a woman left to her own devices.

This song works to combat that pressure to accept that which is lesser than, to encourage women to really see their true value. Literally the lyrical embodiment of her ‘I refuse to take any of this shit’ sentiment. And more than that, in the 1990s, a decade in which Brad Pitt was considered the epitome of a male Adonis, Shania gave not one flying fuck, and told us, ‘So you’re Brad Pitt?’, well, that don’t impress me much. These men she describes, with her country twang rifs, are simply possessing of qualities which should, for ALL of us, be basic, entry level requirements. Things like having any level of intellect and the ability to engage in simple, pleasant human interaction, these are not outrageous things to expect in a significant other. And looking like Brad Pitt, whilst no doubt a plus, is no sole basis for the sacrifice of your own, precious time. Creation of a Pinterest ‘90s dreamboats’ board? Sure. But dedication of life long servitude? I think not.

And Shania Twain is not the only one to wax lyrical about the trials and tribulations of trying to find someone who inspires more than just the literary equivalent of a noncommittal grunt.

Take Carly Simon, whose 1972 banger, You’re So Vain, introduces us once again to the 70s version of the species we know today as ‘The F*ckboy’. He may be donning some fabulous denim flares and a v-neck cut that dips lower than a prima ballerina- but do not be taken in by his retro disguise. This song, appearing on the album, No Secrets, spares no man and leaves no F*ckboy stone unturned. Simon spends the entire four minutes of the track dishing the dirt on all the annoying, egocentric men who have paraded around and wasted her time. Simon takes that post-love-haze ick and runs full speed with it. Not to mention the intrigue this song has held for over thirty years, with people STILL trying to guess which of Simon’s very famous love interests she is very clearly exposing. But she is keeping schtoop about the identity of her gavotting, image-obsessed, apricot scarf wearing hombre. It must be said, that is indeed a very questionable fashion choice there- that should really have been the first red, I mean, apricot flag with that one, Carly Simon.

Then, in 1997, our earholes were absolutely fucking blessed to receive the gift that is Eryka Badu’s sweet, sweet single, Tyrone. This song may be deceptively decked out with languid neo-soul sounds and the caramel-like voice of one Ms Badu, but do not be fooled. Because, as she sings from the very first line: ‘I’m getting tired of your shit.’ Unlike Carly Simon, whose veritable F*ckboy diss track is looking back on what vanities she could not see before, Eryka Badu is giving a warning regarding the precarious prospects for her free-loading man’s rather cushy situation. So not so much a F*ckboy, but more of a Lazyboy. The magic of Badu’s fire-cracker of a song, really comes to full fruition for me with that dynamite ending hook, in which she, in no uncertain terms, ends all pretenses of patience, and kicks that dead weight to the curb like the no-nonsense queen we all aspire to be:

Even the 1950s had their moment, with Marilyn Monroe’s flawless rendition of Diamond’s Are A Girl’s Best Friend, from the 1953 film, Gentlemen Prefer Blondes. Gone are any and all half-hearted insistence’s of love, as Marilyn essentially bypasses the men like a fired-up bulldozer and heads straight for the true prize. “Sure, men are great and all,” she seems to say with her wickedly dazzling smile, as she floats her way through the choreographed routine in a fabulous fuchsia dress, “but I prefer something much more valuable.”

And OK, forgetting for a minute the raging sexism, alarming allusions to inappropriate workplace advances, and the mere fact that the word ‘liaisonic’ is used unironically, (clearly a sign that the writers did not have the foresight to anticipate the lyrics being scrutinized 70 years later for a blog post about the hashtag feminist agenda, exposing the fact that most likely they were just stuck for what to rhyme with ‘platonic’), this song has some very interesting takes on the idea of female ownership and what it means when so blatantly personified through the real, monitory value of diamonds. If men insisted on treating her like an object in such obvious terms, then why shouldn’t she barter for her worth in material possessions, on her own terms? Because men go out of style, but diamonds are forever, and looks like Ms Monroe knew just where to invest her well earned dough- and how it accessorize it.

These women, whether it be over 70 years ago or in more recent musical memory, were really singing for women. Championing the right to stand your ground against the nonsense behaviour of F*ckboys, Lazyboys, boys-who-will-not-stop-professing-their-undying-love-for-you-but-all-you’re-here-for-is-the-hardcore-bling. Feminist themes about recognizing your worth as a human being, distinct from that of your worth as a societal commodity within the confines of an accepted traditional mould, and being able to speak out against all of this utter fuckery! Because, honestly, it is 2020, there is a pandemic raging across the world, and if the F*ckboy manages to survive this current drought in order to make it through to the other side… I’m just saying, whatever that is that you’re trying to pull, that don’t impress me much.