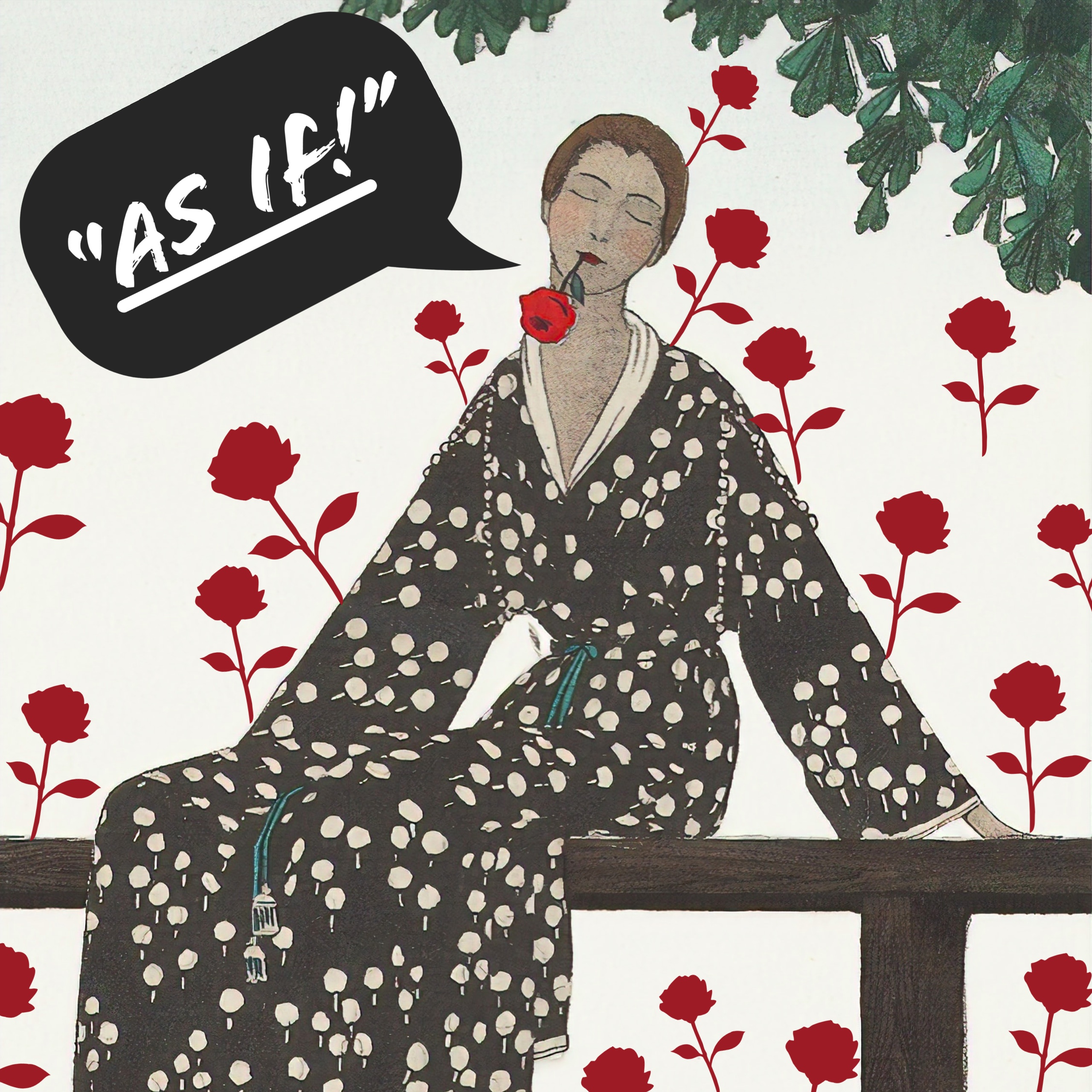 ALL POSTS, FAIRLY FLUENT, french, re: views of the world

Emily in Paris : La Vie en Rose (excuse me while I leave the chat)

I must say that my viewing of Emily in Paris can be equated rather nicely, and shockingly accurately, to the experience one has when dropping acid. That’s to say, you spend the first hour of so just waiting for something to happen, watching time crawl by like a snail on fentanyl, and then suddenly, five hours have gone by, you have consumed all 10 (10!) episodes of Emily in Paris and you are left assessing the remaining shreds of your dignity, hoping that this horrifying incident will not be the fatal event that gets played back to you at the doors of heaven, as a rather haughty angel mercilessly redirects you to the big inferno down the hall. Let us not recall a certain Fairly Current conference call I had, not too long ago, in which I vented to my breadbin pop band mates that I could not possibly finish the series without having some serious wine intervention. Or at the very least, starting a Facebook petition to ban all Netflix-employed buffoons from making any more *hideously obtuse* content about Americans misunderstanding, and subsequently botching, all attempts at capturing French culture in any nuanced or evocative way. Fin.

Now, I feel that I must preface my next admission with the seemingly tangential, but actually crucial, fact that the weather has shifted considerably in the past week or so in Paris. And as a self-identifying adopted Scot, and thus a hardened Viking dame who more or less lives by the Northern proverb, Hoes don’t get cold, it pains me to admit that I have developed severe emotional abandonment issues since summer fucked off and left me shivering in my bedroom, winter coat on, as I temporarily metamorphosed into an ice cube, à la française. And so I would like it to go on record, Madame Judge, that I did not in fact consume the entire 10 episodes of Emily in Paris in one evening out of willful delight. Non, non, your Honour. I was literally too cold to move my hand, reach out any finger (I mean, I had at least four different, equally merit-worthy, options) and press the eject button to get me the hell out of that waspy, anglophone nightmare masquerading as the Paris I know and love (well, at least most of the time). And so, yes, to conclude, I hope the jury take all of this into consideration before condemning this poor victim of meteorological cruelty to the fiery depths of trash Netflix binging heathen hell.

Whilst I would like to pretend that this whole sordid affair never happened, I guess I should just get on with the fucking review, or whatever. The plot line of Emily in Paris, Netflix’s wildly off-the-mark answer to the aged old trope of an American in Paris, given a nauseatingly millennial update, can be boiled down, in essence to this:

*White, conventionally attractive American, finds herself being promoted from glorified lackey at a Chicago based marketing firm, to being the American representative at their partner company, which is based in Paris. Delightfully clichéed antics ensue, in which she traverses the language barrier (oh, yeah, did I forget to mention that she speaks no French?) by charming all the rude, chain smoking Parisians with her Audrey Hepburn-esque beauty, lusting after and actively pursuing her new friend’s boyfriend and lots and lots and lots of running by notable Paris landmarks.*

The first three episodes of Emily in Paris were, quite frankly, the most painstakingly transparent attempts at ‘being relatable’ I have ever witnessed. And the kicker is that Emily, our supposed vessel of entry into this strange new land, is not just blissfully ignorant of her own American colonialist mentality, but she is willfully so. To be blunt, the entire show just felt like a big ol’ excuse to have Lily Collins gallivanting around Paris like some Carrie Bradshaw wannabe reboot (and yes, I am aware that Emily in Paris was created by Darren Star, and thus is basically the forgettable younger sibling to Sex and the City. However, as someone who actually really enjoys Sex and the City, I am purposefully trying to erase all connections between the two, for my own well-being and mental equilibrium). Aside from lacking any ground-breaking plot, or even remotely compelling characters, any redemption for Emily in Paris lies for me in it’s intrinsic aesthetic value. Because the show itself is quite stunning to watch: the mad-cap outfits paired against the various panoramic shots of Paris, looking, dare I say, rather peng still, is the sole saving grace.

Now, as I am a normal human, and not in fact (as I know a few of you cheeky lot may have suspected) a Mark Kermodian maniac with endless hours to spend getting paid to spoon-feed the masses a well-rounded synopsis of my every single thought on this Netflix series… I have broken it down into some concise, stand-out features, which I would now like to turn your attention to.

Anyone who has spent ten minutes searching through the dreaded pages of a Parisian letting agent site will know that this reality-bending aspect of Emily in Paris is just too much to hack. First of all, I do realise that this is a fictitious piece of entertainment. I am not, unlike some, a Fellini fan girl dictator who posits the opinion that all film/ TV needs to reflect the reality of the world we live in. However, the first episode of Emily in Paris takes liberties that I simply, out of moral duty, cannot let slide. Her so-called ‘chambre de bonnne’, the sixth floor walk-up that was used back in ol’ Louis XIV’s day as a maid’s room, is a FUCKING PALACE. Exaggerate, I do not. I nearly chocked on my croissant as our plucky protagonist and her sex-crazed letting agent (is that what he was supposed to be? I’m still not sure…) lament the modest size of her new, all-paid for pad, and console themselves with the fact that, at least the view is not half bad. Ask any of my Erasmus friends who live in a chambre de bonne, and they will inform you that this shit be wack. Not only does her swanky apartment have a full-sized window, a bonnifed luxury for a sixth floor cdb, but it also possesses a highly sought after and rarefied commodity in Paris: space. Exhibit A: Emily AND weird-sex-eyed suit man both fit in that flat. Any real cdb dweller will tell you that that is mathematically impossible. Two is indeed one too many full-sized humans to be situated comfortably in a cbd, without one of them having to sit in the sink/ shower and stick their head out of the window. Exhibit B: I present the video evidence, of episode 1, at exactly 6 minutes and 7 seconds, which show Miss America and thirsty real estate agent man WALKING INSIDE THE APARTMENT. Yes, indeed, not only do two average Joe sized humans fit in the apartment, but they are even able to move about without tripping over the all-purpose bed/couch/dining area! Amélie, who? This is magical realism on crack. Chambre de bonne, mon cul!

Chapter 2 : Excuse Me, Sir, I Ordered an Extra Plate of Cliché with these Stereotypes

By the second episode, I had lost count of all the stereotypes. And fine, I understand that these particular cultural differences are played upon for laughs. And had they brought any comedic value whatsoever, I might have less of an acrid taste left in my mouth. I am not denying that these are things that non-Parisians will encounter when they come to Paris: the confusing floor-numbering system (which isn’t really all that complicated), the laissez-faire working hours, the hostile boulangerie bread situation… OK, maybe that one I could relate to a little too much… But when Emily corners her new, au-pair acquaintance into singing a lil freestyle number in le jardin, I actually lost my shit. Because, not two seconds prior, I had exclaimed aloud, to the alarm of my flatmates in the other room, “If she sings La Vie en Rose, I will literally lose all of my shit!” And low and behold, the gentle, emblematic first words of Miss Piaf’s melancholic banger come hurtling out of my screen. And then what proceeds is what can only be described as the most Hollywood handling of a scene, in which a intrigued crowd begins to form around the oblivious performer, so enrapt is she in her own #feels; and when she belts the last, melodramatic note, this benevolent crowed with apparently nothing better to do, they all applaud. To quote Cher Horowitz: As if! Let me tell you, if I witnessed such a heartfelt display here in Paris, it would be in the depths of a dingy metro station, and would feature about a thousand harried commuters, a makeshift karaoke performer and her pet lizard and about a dozen pickpockets just waiting for unsuspecting tourists to stop, listen, and offer them unfiltered access to all of their possessions.

Ok, so this one is more of a sub-chapter in the grand scheme of major fucking annoyances in Emily in Paris. And it is not because the character of Camille brings any particular significance, or emotional weight to the show. In fact, I think that perhaps out of all of the characters, Camille remains the most indecipherable, the hardest to pin down as a three dimensional personality. On one hand she appears as Emily’s guardian angel, helping her navigate the many confusing French social orders, and quite quickly becomes her friend. Sounds pretty parfait, non? So then why is it that, when Emily discovers that her equally conventionally attractive neighbour/ potential love interest is in fact Camille’s boyfriend (because no-one saw that coming…), and continues to pursue him, I felt no empathy towards our poor, petite Camille? If anything, I felt more egregiously betrayed by the fact that Camille wasn’t actually attempting to court Emily, a little fun bit of lesbian baiting that was even voiced by Mindy, the aforementioned au-pair/ unsolicited park performer. And why couldn’t that have been a story line, instead of this boring, i-like-him-but-he-has-a-girlfirend-and-oh-merde-i’m-actually-friends-with-his-girlfriend trope that has been circling the cinematic drain for way too long now. Because, let’s face it, the ‘boyfriend’ and Emily’s will-they-won’t-they on screen partner, is a pretty fucking tedious character with an extremely questionable moral code. I, for one, would much have rather seen an Emily-Camille situation, and not the shambolic affairs of yet another hetero lust triangle.

So, roughly five hours and a considerable deficit of functioning brain cells later, here we are. Emily in Paris is someone’s cup of tea, I’m sure. Perhaps someone who has never been to Paris, and so can more easily be swayed by this white-washed, fairy tale dream-land version of the City of Lights. And maybe I am cynical, but I just cannot get on board the train to Emily’s Paris, because this is not the Paris I fell for. Let us not forget, there is such a thing as something being too good to be true, and I think in this case, it is advisable to enter into the sparkling world of Emily’s Paris wearing your favourite Chanel pair of rose tinted glasses. Oh, and there is no elevator, so you’ll have to hike it up six flights of stairs! Bonne chance!

[All Emily in Paris photos courtesy of our good pals over at Netflix.]

One thought on “Emily in Paris : La Vie en Rose (excuse me while I leave the chat)”