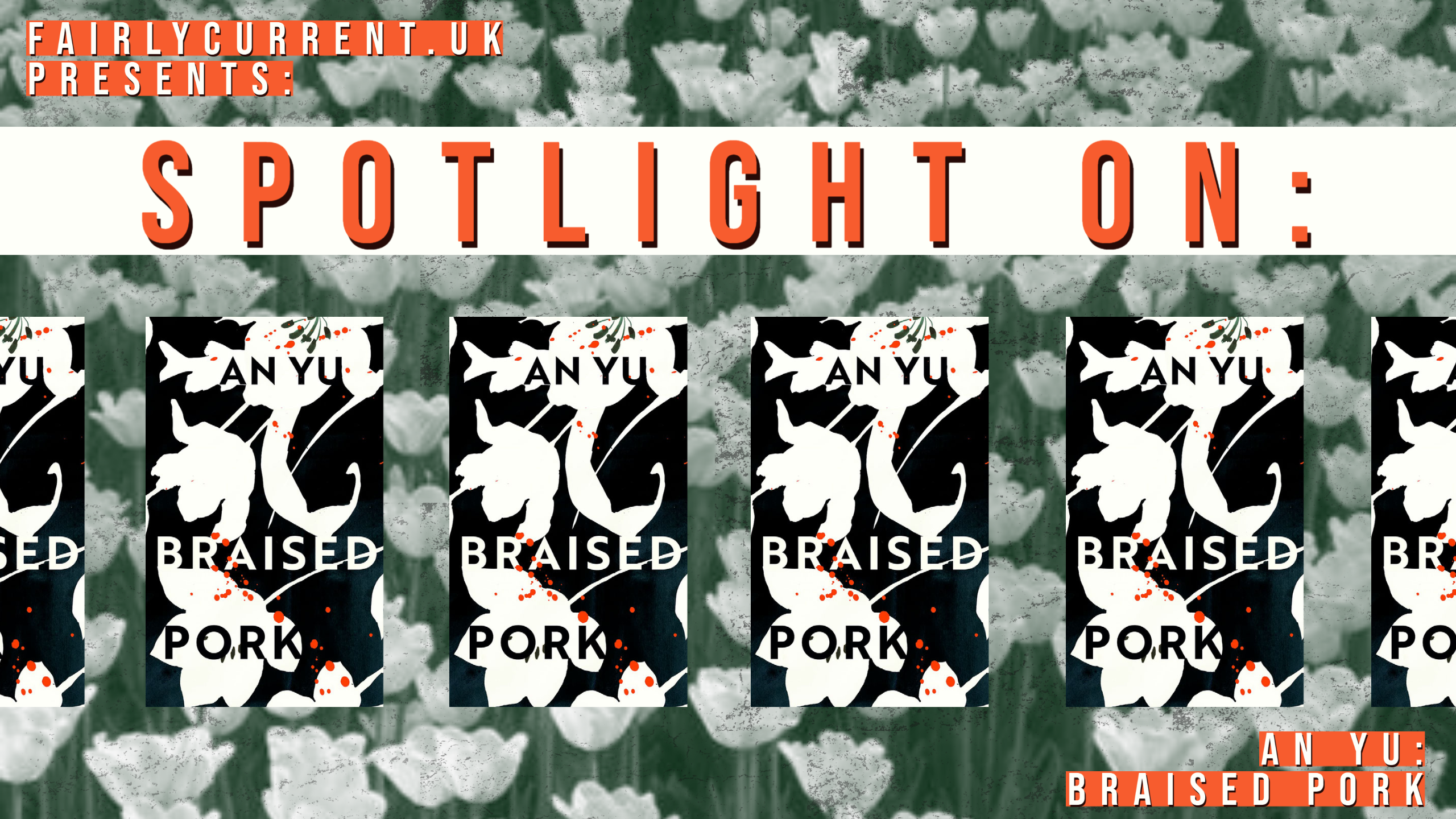 ALL POSTS, chinese, FAIRLY FLUENT, re: views of the world

Welcome to FairlyCurrent’s SPOTLIGHT, a series where we explore the Chinese-language speaking world through art! In this installment we’re looking at writer An Yu’s debut novel: Braised Pork.

An Yu, 26, was born and raised in Beijing, but moved to New York at 18 to study creative-writing at NYU. Her surrealist work Braised Pork is set in modern-day Beijing, and explores the parallels and conflicts between religion and secularism, tradition and modernity, and family ties and the quest for independence all through the framework of loss. We follow painter Jia Jia as, upon finding her husband Chen Hang dead in the bathtub, next to him a drawing of a fish with a man’s head from a dream he had, she deals with the aftermath of grief with a sense of detachment and existential bewilderment.

The motif of the “fish-man” sets the novel’s surrealist tone. The protagonist spends her days painting a commissioned Buddhist devotional mural for a rich secular couple (the irony), and her nights in a bar across the road from her empty apartment, where she finds a connection with the bartender. But contrary to what one might expect, the romantic plotline is almost an afterthought; An uses it to explore a means of Jia Jia slowly beginning to realign with herself.

Juxtaposed with scenes of Beijing nightlife, pollution and housing market, are scenes of the serene Tibetan countryside, rich with folklore and symbolism. Mysterious carvings of the ‘fish-man’, imagery of disappearances in the night amongst fields upon fields of white tulips add to the dreamy, eerie atmosphere. This magical realism is further explored through the strange occurrences shrugged off by the characters as mundane: a fish-tank spontaneously catches alight in Jia Jia’s grandmother’s flat, and Jia Jia happens across a writer who is searching for his wife in a confusing exchange on the bank of a river. Characters seem to pop up from nowhere, with no exploration of their back story or intentions, and later vanish without explanation, yet strangers who are looking for lost things all seem to end up in the same place. Protagonist Jia Jia’s bewilderment of the people she encounters demonstrates how the world seems to make less sense when you have lost someone.

This theme of loss is explored through a very real, physical gateway to a mythical realm, “the world of water”. It’s beautiful to see such an abstract feeling portrayed in such a vivid way; An describes stillness, darkness, disorientation, and feeling as if you’re breathing water. The flow of her melancholic, contemplative prose is rich with references to this quiet, femenine yin (阴）energy of Chinese cosmology, exploring the female identity and how it can morph with grief.

I found something really special in this book. The dreamy, soothing prose perfectly expresses the novel’s balance between the mundane and magical. The central theme of the novel is a universal one, and one in which I think we can all find solace in these times: of trying to rationalise the irrational, feeling vulnerable and fragile but yet still capable of finding connection in strange places, and of finding yourself and your home through the food of your childhood. Braised Pork to me is the symbol of nostalgia, and that whilst we don’t always find what we are looking for, we can always find meaning and truth by returning to our roots.

For soothing, mystical escapism in Beijing and rural Tibet, as well as a soft, safe place to land and explore ways of understanding loss, you can find An Yu’s Braised Pork here.